In the Gallery – ARWE JOURNEY: The Art of IYABA IWO MANDINGO 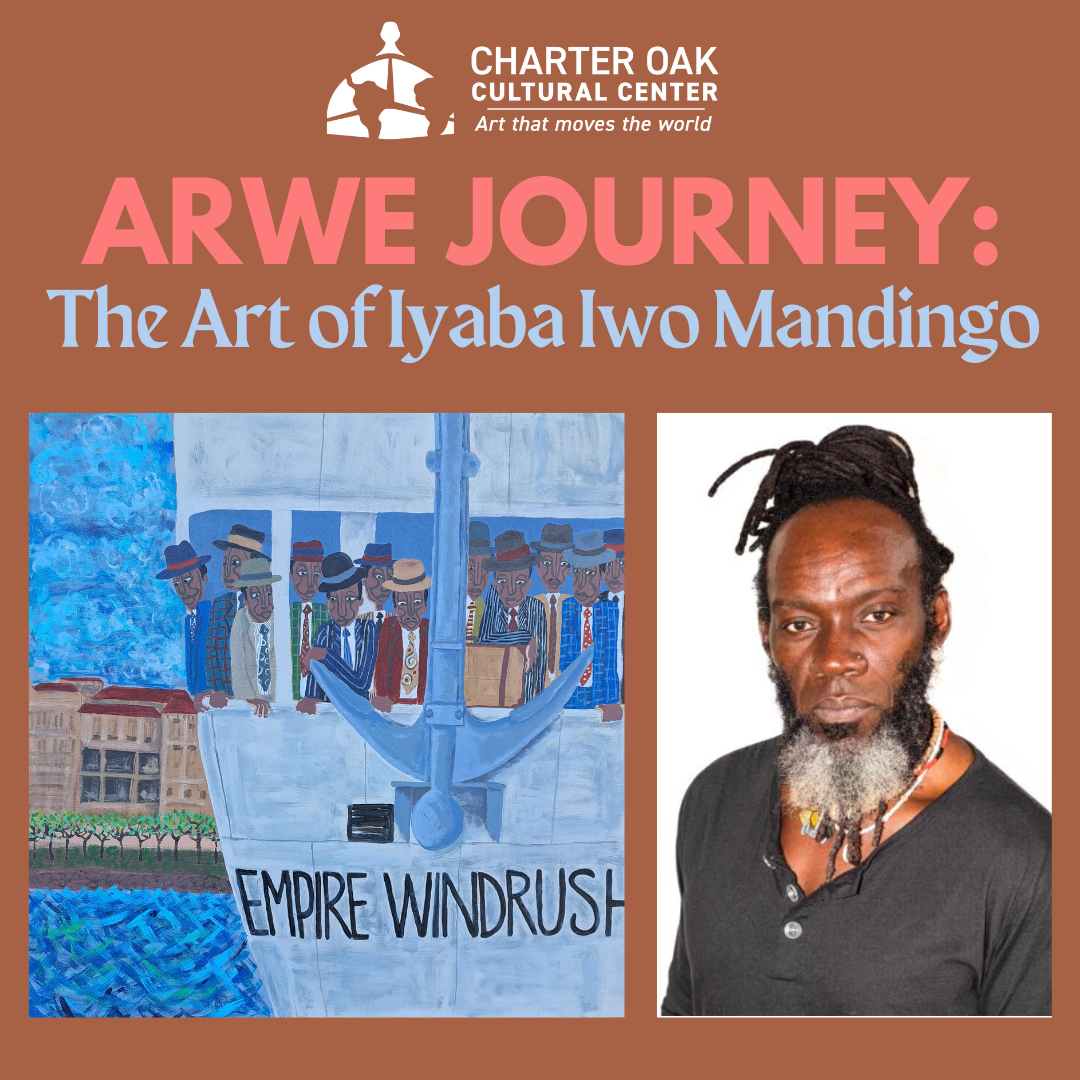 In the Gallery – ARWE JOURNEY: The Art of IYABA IWO MANDINGO

FREE and open to all.

“ARWE JOURNEY’ IS AN ODE TO TWO OF MY HEROS, JACOB LAWRENCE FOR HIS “GREAT MIGRATION” SERIES, SIXTY PANELS THAT TELLS THE STORY OF AFRICAN AMERICANS LEAVING THE HORRORS OF THE JIM CROW SOUTH AND TRAVELING NORTH TO THE BIG CITIES THAT GREW FROM THEIR TWO HUNDRED YEARS OF FREE LABOR…HIS DYNAMIC CUBISM STYLE BRINGS EACH PANEL TO LIFE WITH SHARP ANGLES AND PRIMARY COLORS. AND HIS GIFT AS A STORYTELLER CREATED CAPTIONS INSTEAD OF TITLES FOR EACH PIECE, THAT TOLD THE ENTIRE STORY IN A WAY A MERE TITLE NEVER COULD. AND AUGUST WILSON FOR HIS BEAUTIFUL DEPICTION OF BLACK LIFE IN 20TH CENTURY AMERICA. EACH OF HIS PLAYS GIVE US A PEEK DECADE BY DECADE INTO THE EVERYDAY STRUGGLES AND JOYS OF BLACK LIFE IN AMERICA. HE LIKE LAWRENCE WAS A STORYTELLER WITH A DEEP COMMITMENT TO TELLING OUR STORIES, HE GAVE LIFE TO CHARACTERS THAT WILL LIVE FOREVER.

ARWE JOURNEY IN SEARCH OF BETTERNESS TOOK US THOUGH MANY OF THE TRIALS AND TRIBULATIONS AFRICAN AMERICANS ENDURE AND MANY OTHERS THAT CAME WITH BEING THE ‘OTHER,’ SOME POOR IMMIGRATE COMING TO STEAL JOBS. BUT WE ALSO BROUGHT OUR CULTURE, IN THE MUSIC AND THE FOOD AND THE COLORS. AND WE ADDED OUR VOICE TO THE FIGHT FOR EQUALITY AND JUSTICE. FROM THE GATES OF ELLIS ISLAND WHERE WE CAME INSPIRED BY MARCUS GARVEY’S LETTER OF OPPORTUNITIES FOR BLACKS IN THE OPENING DECADE OF THE 20TH CENTURY AMERICA TO THE FINAL DECADE, WHERE WE JOINED THE LATEST BATCH OF IMMIGRANTS COMING FROM LATIN AMERICA AND THE MIDDLE EAST LOOKING FOR BETTERNESS.

IYABA IBO MANDINGO is a painter, poet, writer, actor and playwright, Arts Collaborator, Artist Advocate, and Arts Educator. He came to the United States from his native country of Antigua as a young boy. Iyaba owes his love of the arts to his mother, a trained singer, and his grandparents, a tailor and a seamstress who first introduced him to colors and patterns, paving a path to the many forms of expression he employs. Iyaba studied fine arts at Southern Connecticut State University and today, teaches in and around the tri-state area as a Master Teaching Artist. Iyaba currently resides in Bridgeport, CT where his art gallery -9104 The Art House- serves as a workspace, classroom and a creative hub.

Iyaba has appeared regularly as a performance poet in venues across the United States and abroad, including the Fort Green Juneteenth Arts Festival, where his clothing brand MandingoWear © made its debut in 2017. He has also appeared at the Nuyorican Poetry Café, Brooklyn Moon, and Next Door Café among others and was the keynote performer at the 2011 Westchester, NY Poetry Festival. In 2015 heembarked on his first African tour bringing his 1Man play “unFRAMED”, his first novel “Sins of My Fathers” and his poetry to South Africa and Nigeria.

Iyaba has authored three chapbooks of poetry, “41 Times”, “Amerikkkan Exile” and “40 days & 40 nites of write” and coproduced a CD “Self Portrait” His first novel, “Sins of My Fathers”, was released in 2014. His first collection of poetry “You Tongue Heavy Lakka 56” was released in 2018 and is available on Amazon. Autographed copies are available via our website www.iyabarts.com

There are no other related events at this time.